Jack White has been out on the road this summer supporting his latest album on his ‘Supply Chain Issues‘ tour. If you have been to one of his shows anytime over the last few years, there is a good chance that your concert experience was different than any other time in this century.  The reason being is that Mr. White wanted his concerts to be a ‘phone-free’ experience. How was this accomplished?  He employed the technology of a company called Yondr.

If you are at all like us, you’re asking yourself, “What the hell is Yondr?”.

The company was founded way back in 2014. We never would have guessed in 2014 that artists would start banning cell phone use at their shows, but alas, it’s where we are in the year 2022. Yondr makes mobile phone pouches which close with a magnetic lock. Kind of like those annoying tags you find on a fancy pair of jeans at a retail establishment. And much like the employees at the store where you bought the fancy pair of jeans, the folks at the concert venue have a device to unlock the pouch. Yondr products can be used at private events to lock up a mobile phone or similar device while inside.

So, How Does Yondr Work at a Show?

The list of artists banning phones at their shows is growing. In addition to Jack White, Dave Chappelle, John Mulaney, and many more are now making their shows phone-free zones.

I recently experienced the Yondr technology firsthand at a Jack White show. Here’s how it went down. First you enter the venue with your phone in tow like any other show, but before you get to the seating area, you make a quick pit stop at the Yondr booth.  The staff on hand give you a pouch like the one pictured above. Then, put the phone inside of the pouch (pro tip – leave the ringer and vibration on) and the staff locks it up on a little device that looks like the aforementioned jeans machine. After that, you proceed into the show with your phone locked away.  If you need to access your phone, you go back to the Yondr booth, use the machine to open the pouch, and you’re back in business.

This was my first experience at a ‘phone-free’ show, and in all honesty, I kind of enjoyed the experience.  It took a minute to get used to not taking it out to snap a photo or video.  One of the perks of the phone-free experience was that you didn’t have the sea of outstretched arms in front of you, blocking your view. You didn’t have people scrolling social media. You had people there, in the moment, enjoying some amazing live music.

The best part was, that after several tall boy beers, I was able to recreate the show from memory. 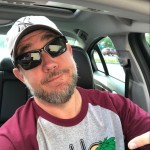 An award-winning Radio Programmer and On-Air host for 20+ years in the Alternative, Active Rock, and Classic Rock formats. Currently, purveyor of fine music & talk🎙 on a radio near you. Lover of all things Las Vegas, fine wines, finer pizzas, New York Sports (Yankees, Giants, and Knicks), and #hashtags .